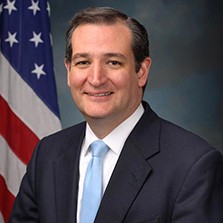 Senator Cruz was born on December 22, 1970 in Calgary, Alberta, Canada where his parents, Eleanor Elizabeth Darragh Wilson and Rafael Bienvenido Cruz, were working in the oil business. Senator Cruz’s father was born in 1939 in Matanzas, Cuba. The elder Cruz fled Cuba in 1957, and at the age of 18, landed  in Austin to study at the University of Texas.

Senator Cruz’s mother was born and raised in Wilmington, Delaware, in a family of Irish and Italian descent. She was the first person in her family to attend college. She earned an undergraduate degree in mathematics from Rice University in Houston in the 1950s.

His parents returned to Houston in 1974. They divorced while he was in law school.

During high school, Senator Cruz participated in a Houston-based group called the Free Market Education Foundation where he learned about free-market economic philosophers such as Milton Friedman, Friedrich Hayek, Frédéric Bastiat and Ludwig von Mises. The program was run by Rolland Storey and Cruz entered the program at the age of 13.

Senator Cruz played a role in some very high profile cases. He drafted the amicus brief signed by attorneys general of 31 states, which said that the D.C. handgun ban should be struck down as infringing upon the Second Amendment right to keep and bear arms. He successfully defended the constitutionality of Ten Commandments monument on the Texas State Capitol grounds. He wrote a U.S. Supreme Court brief on behalf of all 50 states which argued that voluntary recitation of the Pledge of Allegiance does not violate the Constitution. The Supreme Court upheld the position of Cruz’s brief in a 9-0 decision. He served as lead counsel for Texas in successfully defended the multiple litigation challenges to the 2003 Texas congressional redistricting plan. He again successfully defended the State of Texas against an attempt by the International Court of Justice to re-open the cases of 51 Mexican nationals, all of whom were convicted of murder in the United States and were on death row. The State of Texas won despite the International Court having the support of the George W. Bush Administration.

Senator Cruz supports moving to a flat-tax system for income taxes, but retaining the mortgage interest and donation tax credits. He has advocated for repealing the capital gains tax, inheritance tax and cutting corporate tax rates.

He has signed the Americans for Tax Reform’s Taxpayer Protection Pledge.

Senator Cruz has called for more transparency and accountability for the Federal Reserve. He also supports a full audit of the system and cosponsored a bill to do that.

Senator Cruz has attributed the lack of economic growth to government regulation and cosponsored Senator Paul’s “REINS” Act which requires Congressional approval for major rule (as determined by the GAO and Congress). He also cosponsored Senator Rubio’s National Regulatory Budget Act of 2014, which requires an annual report determining the costs for federal regulations.

During a question and answer session in May 2014, Senator Cruz advocated for moving forward with a free trade agreement with the Ukraine. He also described himself as “an unambiguous advocate of free trade.” He also advocated for giving the President trade promotion authority.

Senator Cruz has advocated for eliminating several agencies that are unnecessary and unconstitutional.

The Senator did sign the Contract From America, a pledge to support ten agenda items that limit government and taxes, including a moratorium on earmarks, but only until the federal budget is balanced. But he would require a 2/3 majority to pass any earmark after the budget is balanced.

Senator Cruz has been a very vocal opponent of Obamacare. He was the sponsor of the bill to defund the program and spoke about it in a 21 hour filibuster. He supports a free-market solution to healthcare but has not provided any specific initiatives.

Senator Cruz has said the Medicare eligibility age has to increase (gradually) and the program should be moved to a premium support system that allows Seniors to choose in the free market. He also supports gradually raising the retirement age eligibility for social security and allowing a portion of the individual taxpayer’s contribution to go to a private account. He supports allowing Social Security to grow at the rate of inflation rather than at 1% above inflation as it does currently.

Senator Cruz is opposed to amnesty, which he defines as anything that provides a path to citizenship. He supports securing the border and increasing enforcement. He voted for an amendment that would require the completion of a fence along the US-Mexico border.

He also sponsored a bill that would put an end to deferred action for unaccompanied children and reimbursement to the National Guard for any deployments to the border during the crisis.

Senator Cruz has criticized National Security Agency for being ineffective on identifying potential terror threats and for spying on US citizens.

The Senator has expressed his opposition to the Obama Administrations decision to downsizing the military. He also questioned why the military was using more expensive alternative fuels in a time of scarce resources that should be used build US forces.

Senator Cruz has called on President Obama to seek Congressional authorization to continue airstrikes against ISIS. He has been supportive of the strikes that have taken place and for the humanitarian aid. He has advocated for strong action and elimination of ISIS through bombing.

In 2013, Senator Cruz stated that the US should not get involved in the Syrian Civil War.

He has questioned the Justice Department on the constitutionality of drone strikes against American citizens and sponsored a bill that would prohibit the practice.

The Senator criticized President Bush and said that the US should have left Iraq sooner, and he cosponsored a bill to expand sanctions on Iran.

Senator Cruz put a hold on all State Department appointments because of the FAA’s decision to stop all flights from the US to Israel. The decision was reversed and the Senator lifted the holds.

Senator Cruz has advocated for installing antiballistic missile batteries in Eastern Europe to reassure NATO of US commitment.  He has also advocated for the US to be more outspoken in support of efforts toward Democracy in countries like Venezuela.

He stated during a discussion on ISIS that “United States foreign policy should be more focused on removing immediate threats rather than geo-political gains.”

Senator Cruz has advocated for states to continue regulating fracking and prohibit any federal interference, and expressed his support for LNG exports, including cosponsoring a bill to expedite the application and approval process for LNG exports.

He cosponsored legislation to approve the Keystone Pipeline, as well as a bill that would allow states to lease energy rights on federal land including offshore drilling.

Senator Cruz is opposed to cap-and-trade, the moratorium on off-shore drilling, and EPA regulation of carbon dioxide. He supported bills that would prohibit the EPA from regulating carbon emissions without Congress giving them that authority.

Senator Cruz cosponsored a bill requiring the EPA to report the economic impact of a proposed regulation under the Clean Air Act. He also cosponsored a bill that would require publishing on the Internet the data that was used to determine that a species is endangered as well as a bill to stop the EPA from greatly expanding its authority under the Clean Water Act to take over private and state waterways.

Senator Cruz voted for an amendment to a bill that would limit the amount of agricultural subsidies issued to farmers with an income over$750,000, and voted to end sugar subsidies.

Senator Cruz has criticized judicial activism on the bench and has expressed concern that one appointment to the Supreme Court could mean moving the court from constitutionalist to activists.

Senator Cruz opposed the nomination of Caitlin Halligan to the District of Columbia Circuit Court. As New York Solicitor General, Halligan supported a lawsuit against gun manufacturers to hold them liable for crimes committed with guns.

In 2014, Senator Cruz wrote an editorial in the Wall Street Journal taking President Obama to task for violating the Constitution by bypassing Congress.  He is listed as an “expert” by the Texas Public Policy Foundation’s Center for Tenth Amendment Studies.

Jeff Tobin of the New Yorker wrote about Senator Cruz, “That is the kind of politician Cruz has become—one who came to Washington not to make a deal but to make a point.” He has generally strove to keep his campaign promise, including becoming an outspoken opponent of Obamacare, including introducing legislation to repeal it and launching a filibuster against funding of the bill.

He has not shied away from breaking ranks with his party on what he views as matters of principle, including voting against the Hurricane Sandy relief bill and confirmation of John Kerry.

In 2013, it was discovered that Senator Cruz had failed to disclose a financial relationship with Caribbean-based holding company during the 2012 campaign. When he did comply with the ethics rules, he failed to comply with a Senate rule requiring full identification and location of the company.

Senator Cruz has received strong support from the Tea Party and conservative grassroots, helping with what many considered to be a surprise victory in the primary run-off for the 2010 battle for the Republican nomination.

Senator Cruz came in second in a nine-way Republican primary. He faced Lt. Governor David Dewhurst in the resulting run-off election. The Lt. Governor was well-financed and supported by the Republican establishment. Senator Cruz went on to win with a 14-point margin in a major political upset. He won the general election against Democrat Paul Sadler 56% to 40%

Senator Cruz taken a leading role on some very high profile cases, arguing in briefs and oral arguments that the D.C. handgun ban should be struck down as infringing upon the Second Amendment and that the International Court of Justice could not re-open the cases of 51 Mexican nationals convicted of murder and on death row in the United States.

Senator Cruz has ruffled a number of feathers in Washington, andhas been characterized as driven by single-minded political piety. He has been criticized as someone unwilling to yield or compromise.

As a law student at Harvard, he reportedly refused to study with anyone who hadn’t been an undergrad at Harvard, Princeton, or Yale. But he is also seems to be universally respected for his intellect, described by friend and foe alike as brilliant but with a hard edge.

He is considered a gifted orator who speaks without the use of a teleprompter. He also gave a very impassioned speech on the Senate floor regarding the three Israeli teenagers who had been kidnapped.

Senator Cruz seems very relaxed in interviews, even when the interviewer is in disagreement with his positions. Some say his dialogue seems carefully rehearsed and not spontaneous though, even in personal interviews.